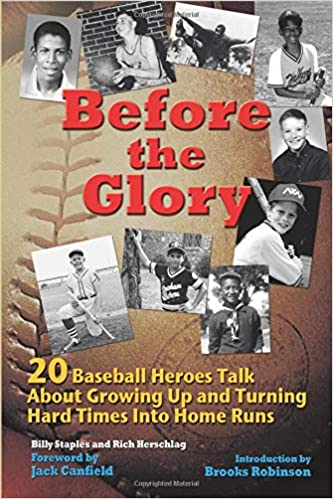 Eight-year-old Mudcat Grant pieced together complete third-grade textbooks from boxes of discarded, tattered books. Brooks Robinson grew up playing ball with kids from the school for the deaf across the street and learned sign language. When Bill Mazeroski was 11, he lived in an oversized chicken coop without electricity or plumbing. Thirteen-year-old Ferguson Jenkins almost lost his life when he was overwhelmed by gas in a wheat silo. While recovering from a knee operation and hoping simply to walk again, 15-year-old Orlando Cepeda grew six inches in bed.

These are just a few of the fascinating and surprising tales readers will find in Before the Glory. They are tales of youth told in the first person by 20 of the national pastime’s greatest and most compelling figures. Whether well off or poor, tall or short, outgoing or outcast, they are all unknown kids looking to get by. They are black, white, and Latino. They are kids from the North, South, West, Canada, and Puerto Rico with a dream–and not necessarily the dream of playing baseball in the Big Leagues. They are kids spread across three or four generations, but all residents of the timeless era known as childhood.

Before the Glory is educational reading for the young. Written in an accessible style, the book provides school age readers with a walk through the decisions, mischief, adventure, disappointment, and triumph of their peers from other generations.

Before the Glory engages older readers with detailed first-hand recollections of places and customs that may be gone but live on in memory. Whether it’s Robin Roberts’ family applying the Celtic art of moving an old house on wheels, or five-year old Brian Roberts having open heart surgery, Before the Glory adds a new dimension to the lives of the players readers grew up with and identified with.

Before the Glory is history, taking the reader from the ghettos of Puerto Rico, to the deep South during the Depression, to wartime California, to the rough streets of Detroit, to the frozen lakes of Ontario. The book is about poverty, segregation, innovation, integration, survival, war, peace, love, hate, villians, and heroes–all as seen through the eyes of everyday children who happened to have the desire and ability to rise to the top of America’s greatest sport. It is the type of personal history until now largely lost in recaps of World Series games and interviews on batting technique. As Brooks Robinson says, this is the most interesting stuff, and the stuff you won’t find in a single obituary.

Before the Glory is inspirational reading for young and older readers alike. If Marvin Miller can go from an underachieving high school student with a disabled arm to running the Players Association and reinventing the business of baseball in the 1960’s and ’70s, the rest of us may have a little more gas left in the tank than we think.

Before the Glory is the first in a series of books planned by the authors, who seek to provide unforgettable reading and learning. Future efforts will cover the childhood experiences of well known basketball and football players, musicians, performing artists, business people, and world leaders. In keeping with the authors’ goal of giving back, a sizable portion of their income from each project is being donated to charity.

Before the Glory is based on in-person interviews with the players, each of whom personally reviewed and approved his own chapter. To a man, these players have been and continue to be unambiguously and wholeheartedly supportive of the authors and their goals. Before the Glory has been endorsed by Dan Foster, President of the Baseball Players Alumni Association, and members are lining up to become part of this exciting ongoing project. Offers of support and access have come from Brian Cashman, general manager of the New York Yankees, and Larry Lucchino, general manager of the Boston Red Sox. Grateful for this response, the authors of Before the Glory know Major Leagues are in a unique position to convey positive messages to kids and are hoping to serve one up. 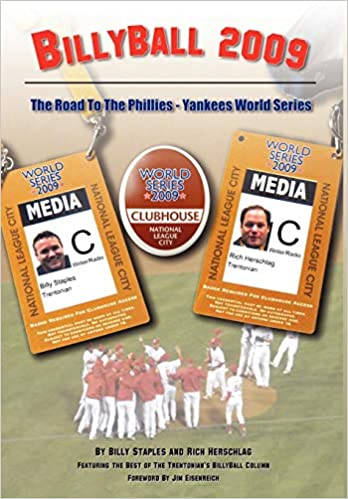 When authors Billy Staples and Rich Herschlag are asked to write a baseball column for The Trentonian, they decide to put their own stamp on it. Covering primarily Philadelphia and New York, they forego the dirt and seek out baseball’s role models, well known and not so well known. They sidestep the steroids and find the stories of courage, dedication and humanity the mainstream press so often misses. Shortly after the All-Star break, another storyline develops. In Philadelphia, the 2008 World Champions are beginning to reemerge. Up the turnpike in New York, the Yankees are showing shades of their former selves from a decade earlier. One by one, division rivals fall by the wayside, and on October 25 only the Yanks and Phils remain standing. The Phillies-Yankees World Series is a battle of baseball titans. For Staples and Herschlag—who in their first full year get to cover it from field level—it is the ultimate reward for doing it their way.